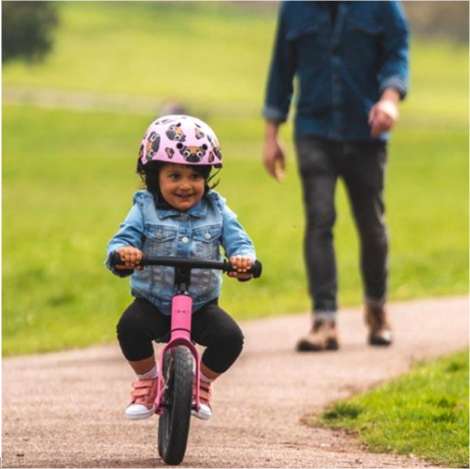 If someone showed you a picture of a balance bike, there’s a good chance you’d think it was a regular bicycle with the pedals taken off. You might not even notice the lack of pedals at all. But actually, there are a few crucial differences that make the balance bike a great way for children to develop the skills they need to learn to ride a bike faster, at a younger age, and with much bad habits to unlearn than with training wheels.

What is a Balance Bike?

A balance bike—also sometimes called a running bike or gliding bike—is a pedal-less bike with two wheels. The frame and seat are lower to the ground than regular bicycles, so children can sit with their legs slightly bent and feet planted firmly on the ground. Rather than peddling, riders run forward while still seated, lifting their feet to glide alone when they feel comfortable with it. It’s called a balance bike because that’s exactly what it helps children do—learn to balance on a bicycle before adding in the pedaling portion. By the time they’re ready for a regular bike, kids have already learned the more difficult skills involved with bicycling, and the addition of pedals takes very little adjustment.

The History of the Balance Bike

It’s possible you’re thinking this is a crazy new fad, but balance bikes actually predate the invention of the conventional pedal bike by several decades. The original iteration was introduced to the public in Mannheim, Germany in 1817, by German inventor Baron Karl von Drais. Originally called a Laufmaschine, it became known as the “dandy horse” by the general public. Though made for adults rather than children, the dandy horse otherwise looked and functioned much like modern balance bicycles—it was a wooden frame with inline wheels and a seat for riders to sit on and push themselves along with their feet. It wouldn’t be until the 1860s that someone would think of adding pedals to this popular form of transportation.

Today, balance bikes are made primarily for children, and come in a variety of different designs and materials, with diverse price points to match. They’re often made of lightweight metal so as to make it easier for children to move under their own power, with wheels made out of everything from hard plastic to foam to a more traditional rubber. Some models even come equipped with brakes, which means children get used to keeping their balance not only when riding along but when stopping suddenly.

Another important feature of balance bikes is the fact that they grow as a child grows, up to a point. The seats and handlebars are meant to be adjustable so that a child can continue to use their same balance bike through several growth spurts. Some high-end models are even designed to be converted into a regular pedal bicycle when the child is ready to make the transition to pedalling.

Overall, balance bikes are a great potential alternative to training wheels, and should absolutely be considered when beginning the process of teaching—or learning—to ride a bike.