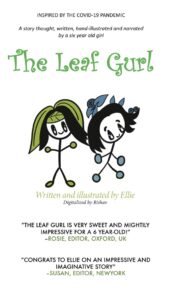 Washington DC / 360PRWire / December 13, 2021–Six year old Ellie’s hand sketched story and animation won selection in three international film festivals. The pandemic lockdown inspired a Maryland kindergartner to write a story about friendship, playing in nature and imagination. The hand-illustrated story called “The Leaf Gurl” was published as a book as well as an animation, narrated and directed by Ellie. In history, there have been only a few child female authors who have written and published books.

“The Leaf Gurl” was selected in 3 film festivals: 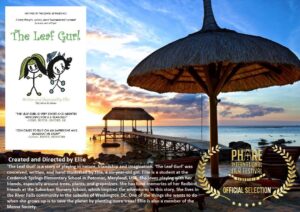 The jury for Chicago based Alder International Film Festival (AISFF) that was held in October 21-27, selected and screened Ellie’s animation, “The Leaf Gurl”.

In November 2021, the Phare International Film Festival announced the selection and screening of “The Leaf Gurl”.

The Kalakari International Film Festival also selected “The Leaf Gurl” and will screen the film in February 2022.

Ellie is six years old and is a student at the Carderock Springs Elementary School in Potomac, Maryland, USA. Ellie’s first professional book was “The Leaf Gurl”, which received rave critical reviews by publishing experts and editors. She loves playing with her friends and enjoys creating new stories. She has fond memories of her Redbird friends at the Suburban Nursery School. She lives in the River Falls community in the suburbs of Washington DC. One of the things she wants to do when she grows up is to save the planet by planting more trees! Ellie is also a member of the Mensa Society. Ellie can be contacted through her website www.elliesmagicalworld.com