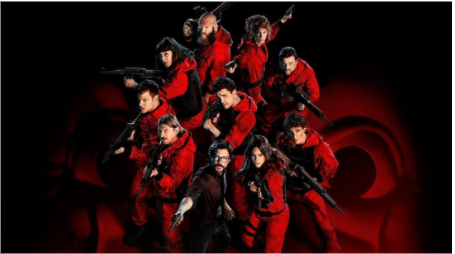 Money Heist’s (La Casa De Papel) journey on Netflix comes to an end this Friday with the arrival of Part 5 Volume 2 (or sometimes referred to as season 6, season 5 part 2, or just simply as the final season – however you want to call it). We’ve witnessed five incredible seasons of Money Heist, and below we’ll be discussing everything we can expect from the final season, keeping track of trailers, clips and now, episode titles.

Money Heist is set to come to an end with the explosive final episodes of its fifth season.

The Spanish crime drama has enthralled viewers since 2017 and the second half of Volume 5 will reveal the fate of the show’s lovable gang of thieves once and for all.

Following Part 1’s dramatic conclusion, which resulted in the death of Tokyo (Úrsula Corberó), anything could happen as the remaining crew members fight to survive against the army in the Bank of Spain.

Here’s everything you need to know about when Money Heist (also known as La Casa de Papel in Spanish) will be released on Netflix.

What Time Will Money Heist Volume 5 Part 2 Be Out on Netflix?

The second half of the fifth season, which is technically part of Season 2 alongside Volumes 3 and 4, will land on Netflix on Friday, December 3.

Part 2 of Money Heist’s fifth volume consists of five episodes, and these will be released in one go by the streaming platform.

Netflix always releases shows at midnight Pacific Standard Time (PST), so the time that programs are put on the platform around the world differs, depending on global time zones.

Those in Hawaii and Alaska, for example, will have the new episodes available the day before the official release day, simply because of how those states’ time zones compare to midnight PST.

Here is when Money Heist Volume 5 Part 2 will be released on Netflix:

Will Money Heist Volume 5 Part 2 Be Available to Watch Online for Free?

Netflix used to offer a free month’s subscription to new users, however this has since been scrapped by the streaming platform. Viewers hoping to watch the final season of Money Heist for free will be unable to do so.

The Standard subscription gives users the ability to watch and download shows on two devices as well as have access to HD resolution, and the Premium subscription does the same for 4 devices and also makes Ultra HD resolution available.

Money Heist season 5 part 2 premieres on Netflix on December 3, 2021, which is exactly three months from the premiere of part 1.

We’re really glad Netflix is rolling out part 2 pretty quickly after part 1. Sometimes, fans have to wait six-plus months for the final episodes, so I’m glad that’s not happening with Money Heist. We’ll actually get to see the end of the series relatively soon.

Sometimes you may not see the new season straight away. This is usually a caching issue which means you’ll need to perform a couple of tricks to trigger the new season showing.

To rectify this, you’ll need to essentially reload the Netflix app. On mobiles or app versions of Netflix (i.e., Netflix on your Roku, Fire Stick or Smart TV), navigate to the help section and there’s a reload Netflix button.

If you’re on a browser, you may need to refresh your cache or close the website down and open it back up again. Logging in and out can also assist in bringing in the new releases on Netflix too.

You can also use a direct link to get to the fifth season of Money Heist and we’ll add that here once we have it.

The biggest problem you’ll likely be facing by the end of September 3rd is the fact that you’ll have run out of episodes. Don’t worry, you’ll only have a couple of months to wait before the final half of season 5 arrives on December 3rd, 2021.

Let us know in the comments if you’re staying up late or waking up early to watch. In the meantime, check out our other coverage on Money Heist including where you can watch the cast of Money Heist in other Netflix Originals.