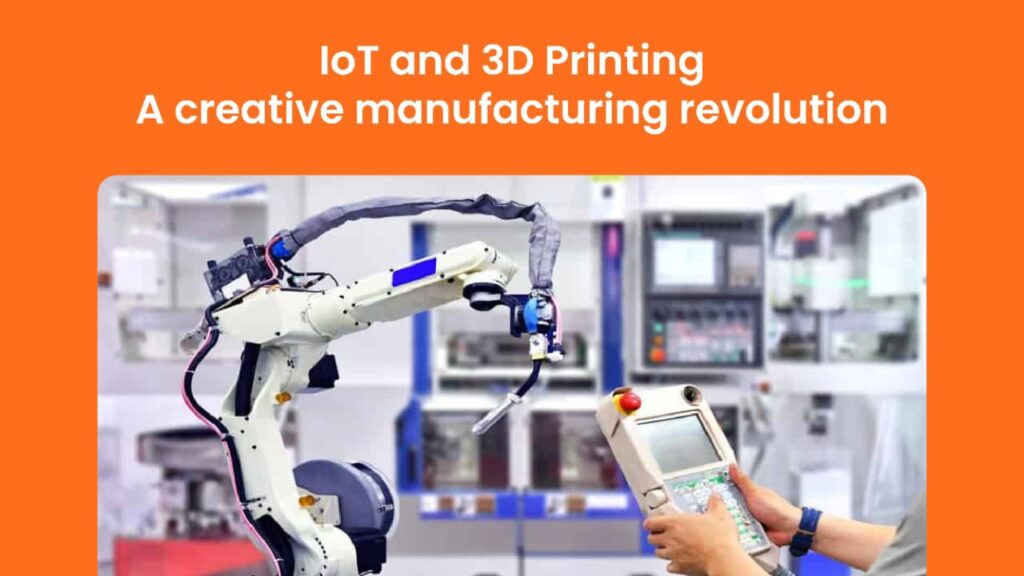 IOT is basically a newly formed technology which is entangled with our lives in multiple ways and the amalgamation of IoT with 3D printing can make several parts of our lives easier and simpler. The combination of additive manufacturing with IoT has so much potential that it can create dynamic technical products which would take human activities to some other level.

What is an IoT?

IoT works on the concept of working on shared data. In this process two devices are connected, and this connection can be formed using sensors, electronic parts, electronic gadgets, software etc. With the help of an IoT data can be shared between two objects/devices without any human involvement. The multi-dynamic working abilities of IoT has grabbed a lot of attention and it is believed that over the next few years it is going to be used for over 2.5 billion devices.

Why look at the IoT and 3D printing together?

3D Printing is becoming increasingly popular in the automotive, electronics, and healthcare industries, to name a few, and the IoT can play an important role in ensuring quality control by connecting big data analytics to online 3D printing services through the strategic use of embedded sensors.

The IoT involves a constantly growing number of sensors and devices gathering every possible bit of data about human behavior and interaction and allowing businesses to gather information about how their products behave and use it to understand and predict future behaviors.

By placing sensors to collect and analyze manufacturing information to detect production problems in real time, the technology can identify factors such as temperature and structural integrity that help improve the quality of output coming from the manufacturing floor. This is something that is already being applied by many companies in the aerospace industry.

Combining the two revolutions – digital manufacturing and big data – is starting to equip a multitude of industries with tools that can revolutionize the way processes are monitored, analyzed, and improved to enhance the quality of products.

What can IoT do for Additive Manufacturing?

3D printing is at a place where it is deeply involved with various industries. More companies are starting to see the power that online 3D printing service allows and have started creating 3D printers that are IoT compatible. The same attributes that our widely known smart devices possess are being integrated into these new smart 3D printers and smart factories.

Here are a few use cases.

Greatly increased access to data for improving efficiency in factories

There is an immense amount of data that is gathered from smart devices. Applications can track usage statistics to make a user’s experience better like notifying a user about demand. This can reduce overall costs or assist with the management of inventory. This can even be expanded into supply chain management since a user would be able to adjust overall distribution based on weather conditions, driver availability, or time of the year.

Security in the production process and data itself

Having IoT enabled 3D printers and smart factories allows for preventative maintenance. The sensors in the machines can notify a user when a part on the line is not up to standard which prevents time being wasted or potential repercussions for sending out a bad product. It can also warn a person when a machine is close to breaking down or needs maintenance.

As for the data that is being transferred across a network. Once again, the monitoring properties that come with IoT can enable users to know where their data is going and when something has changed. Privileges can also be configured to specific personnel for added layers of security.

IoT takes great advantage of machine learning because of the data that is gathered. If you have the knowledge that was gathered from the sensors, having connected machines within the factory can even allow for around-the clock production if it is needed.

Role of 3D Printing in IoT

Can we imagine a technology which can provide smart devices at a lower cost? So, plastic made objects can be used as wireless connected smart devices of IoT using online 3D printing service.

Just imagine if you could attach a 3D printed sensor to your bottles which can send you data when the bottle is low and automatically refills using a smart platform of IoT technology. For instance, a complete house can be built using online 3D printing India. Basically, it is a remarkable idea to provide a home to homeless people in the country. It’s a very fast process.

Basically, when it comes to prototyping, online 3D printing service leaves its significant use. So, it is most valuable for mass production, some of its most convenient uses are actually in experimenting with designs. So, to get them right before mass production. 3D printing prototype for the car racing industry which involves different manufacturing tools and machinery for a lot of functional tests.

Basically, online 3D printing India, when combined with connected healthcare, impacts on the growth of industry, economy, reduces human effort as well as a blessing to mankind.

The right enclosures for IoT with the help of 3D printing

3D printing is definitely the best choice when it comes to providing enclosures to an electronic device as it helps in making enclosures which perfectly fits a device.

On the other hand, we know that these devices undergo multiple changes which later hampers the structure and size of the enclosure, in such cases injection molding isn’t much useful as it cannot accommodate so many modifications, but additive manufacturing can work upon those multiple modifications and create an enclosure which perfectly fits the device, and we need not worry about the additional costs or expenses as 3D printing reduces both.

The other major advantage of using online 3D printing India in making such devices is that specific designs can be inserted into the printers and this reduces the production time drastically.

As we know that with the help of IOT we collect some data from devices and this data can be utilized in various ways. Combining this data with online 3D printing service can help to create customized  goods with low manufacturing cost. For example, if an IOT is linked between the feet of a person riding the bicycle and the bicycle itself, then using the data a customized bicycle can be made which would aid the cycling abilities of the person riding on it.

Similarly, a cricket bat can be made for a cricketer in such a way that it aids the batting skills of the batsman and helps him yield the best results.

With the onset of the advanced 3D printing technology, it is becoming possible to make electronic devices, circuits, and other parts, using online 3D printing service in making electronic goods not only speeds up the manufacturing process but also considerably reduces the expense on the raw materials.

Why Should 3D Printing Technology be Used in IoT?

Basically, in the past if we prototype any IoT devices we used the ready-made plastic box. It was important to fit the device. Then we use glue to make it stable inside the box. So, it was too difficult to make such a box which can fit. In order to remove this difficulty 3D printing came into the picture. Hence, there are a few reasons why we use online 3D printing service in our projects today.

“Industry 4.0“- what does it sound like? Like a tycoon-game, right? But this is soon going to be the biggest shift in the upcoming future. Industry 4.0 is modernizing manufacturing and boosting western industrial competitiveness. The manufacturing it offers can collect, analyze, and act on immense stockpiles of data. Then, it sets those actions in motion with highly efficient, automated robotics. As a result, we get a higher quality product with a lower operating expense. It is a new way of human-machine interaction.

Combined 3D printing and IoT is shaping our imaginations. It makes companies more efficient. Moreover, it looks like the industrial revolution. In conclusion, it is strengthening the future market